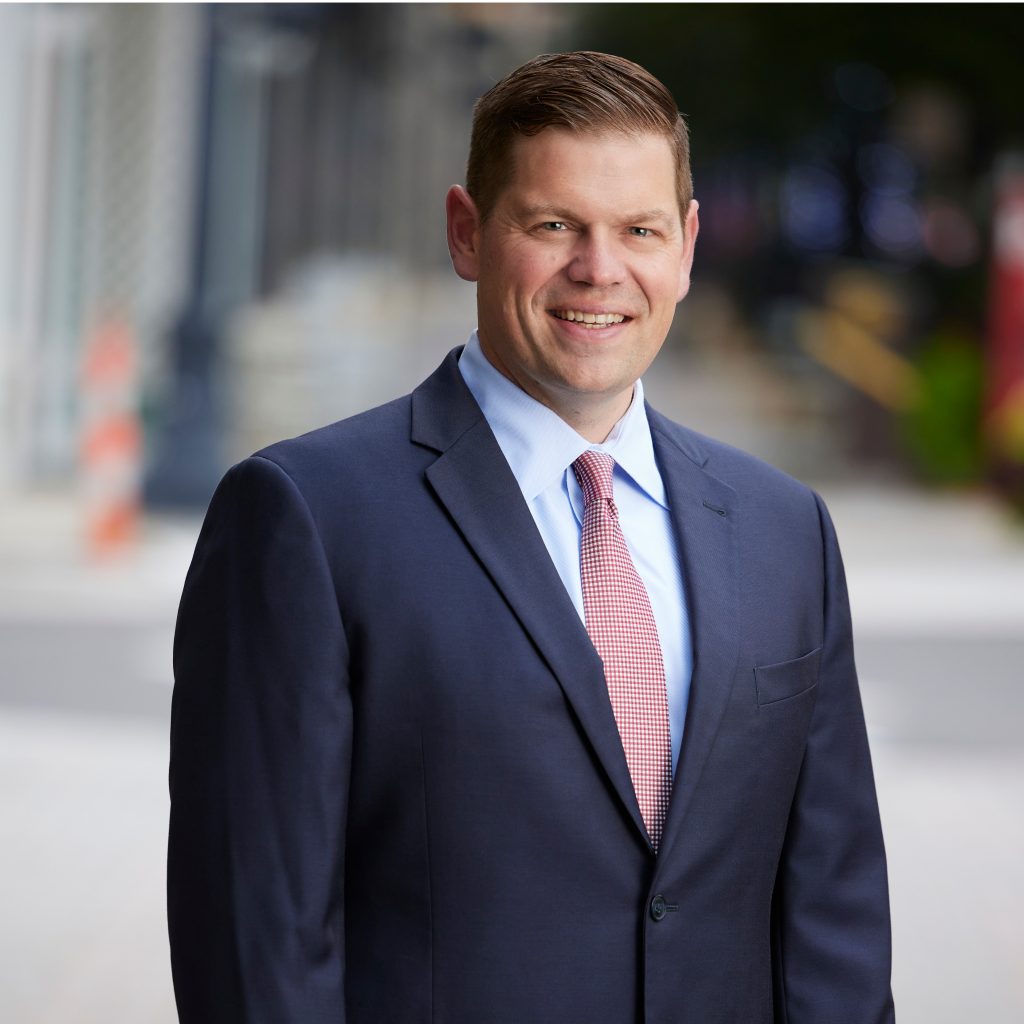 He is a trial lawyer representing plaintiffs and defendants and practicing primarily in the areas of personal injury and wrongful death, employment, and commercial litigation matters. He has trial and litigation experience in both federal and state courts across the state of Michigan and in numerous other states.

Matt devotes the majority of his practice to helping individuals and families who have catastrophic injuries and wrongful death claims. Matt’s experience includes vehicular, aviation, product liability, and construction accidents.

Whether Matt is representing individuals or businesses, he maintains a genuine and passionate dedication to his clients and their interests. While many “litigators” dread the court room, Matt welcomes the privilege of presenting his client’s case to a jury.

2021 - Matt Wikander and Charissa Huang obtained a confidential settlement of $1.75 million on behalf of the estate of a woman killed in an industrial accident. The product liability case, which involved industrial machinery, spanned the course of multiple years, resolving prior to the jury reaching its verdict.

2020 - Matt Wikander secured a $1.725 million pre-suit automobile negligence and wrongful death victory for his clients – the personal representative of the estate of a teenager who was killed in an automobile crash along with three individual occupants of that same automobile.

Plaintiffs’ decedent was 14 years old at the time of his death in a rear-end automobile crash on US-131 in Kent County. The total dollar amount of the underlying defendant driver’s insurance was tendered to plaintiffs to resolve all claims prior to the mediation, leaving only plaintiffs’ claims against the underinsured motorist’s carrier. The primary contest was whether plaintiffs could trigger the additional amount in underinsured motorist benefits insurance coverage from their own insurer by using the pro rata analysis. This issue was highly disputed, but ultimately the insurance company agreed to pay a substantial amount of the policy limits to resolve the case prior to litigation.

2020 - Matt Wikander and Charissa Huang reached a $2,000,000 settlement after their client, then 30-years-old, was catastrophically and permanently injured as a direct result of a defective and illegal firework.

The case involved highly technical issues related to pyrotechnics, products liability and array of applicable state and federal laws and regulations applicable to the manufacture, testing, importation and sale of consumer fireworks. The primary contested issue in the case was plaintiff’s comparative negligence. Plaintiff’s counsel was aggressive in pursuing legal rulings prior to trial, leading to the case settling approximately one month before trial.

2019 – Matt Wikander led the successful defense of a new restaurant chain against claims of trade dress infringement and unfair competition. The plaintiff in the matter owned a chain of restaurants and was attempting to prevent the grand opening of our client’s initial location. After soundly defeating the plaintiff’s request for a temporary restraining order, the plaintiff ultimately dismissed all claims rather than attempt to litigate further.

2019 – Matt Wikander secured a pre-suit wrongful death settlement for uninsured motorist policy limits for the estate of an individual killed in a motor vehicle crash. Our client had died when she lost control of her vehicle on icy roads after swerving to avoid a ladder in the highway. Wikander successfully argued that the ladder qualified as a “hit and run” driver under the estate’s automobile insurance policy for uninsured motorist benefits.

2019 – Matt Wikander secured a pre-suit wrongful death settlement of insurance policy limits for the estate of an individual killed in a motorcycle crash.

2018 – Matt Wikander successfully represented the estate of an elderly individual who eventually died as a result of a traumatic brain injury received in a rear-end car crash in northern Michigan. Matt was able to obtain an insurance policy limits settlement shortly after filing the wrongful death lawsuit against the at-fault driver, who had initially contested liability for the crash.

2018 – Prior to filing a lawsuit, Matt Wikander was able to secure an uninsured motorist insurance limit settlement on behalf of the estate of a motorcyclist killed by a vehicle being driven illegally, and whose driver fled the country shortly after the crash.

2018 – Matt Wikander represented the estate of a woman killed on a rural Kent County road as she attempted to remove her dead dog following it having been struck by another motor vehicle. The at-fault driver was negligent, cresting the hill a such a high-rate of speed that he could not avoid the woman. Without litigation, Matt was able to negotiate an insurance limits settlement against both the at-fault driver, and the woman’s own insurance company for under-insured motorist benefits.

2018 – Prior to filing a wrongful death lawsuit, Matt Wikander successfully obtained an insurance limits settlement from both the insurance company of the at-fault driver, and the client’s own insurance company for underinsured motorist insurance following a catastrophic winter crash in which the defendant failed to yield at a busy intersection in Muskegon County.

2018 – Matt Wikander was able to obtain a full insurance policy limits settlement on behalf of a young boy permanently injured when he was struck while attempting to cross the road near his sibling’s elementary school in Barry County. The at-fault driver’s insurance company attempted to blame the young boy and diminish his injuries until Matt was able to secure testimony from the boy’s surgeon detailing the severity of the injuries. Shortly thereafter, the defendant’s insurance company tendered full policy limits to avoid litigation.

2017 – Matt Wikander successfully represented a driver and passenger seriously injured when struck at a high rate of speed by a drunk driver during a blizzard in Grand Rapids. The driver sustained numerous injuries, including cervical spine fractures and a traumatic brain injury. The passenger sustained lumbar spine injuries and PTSD. Both cases settled prior to litigation for a combined $950,000.

2017 - Matt Wikander represented a Tier 1 auto supplier in the prosecution of a former employee who had violated numerous employment agreements, misappropriated trade secrets and other confidential information, and who started work at a competitor. In short order, Matt and his team filed suit against both the former employee and competitor business and were able to obtain an Temporary Restraining Order from the court, precluding the former employee from working at the competitor. The matter resolved with all defendants shortly thereafter.

2016 - Matt Wikander and Charissa Huang were successful in obtaining a settlement of $650,000 on behalf of a client who suffered numerous injuries after his car crashed into a backhoe. The defendant was operating the backhoe illegally, at night and without sufficient warning flashers or markings. The defendant’s insurance company refused to offer any money prior to litigation, instead blaming our client for the crash. Shortly before trial, the defendant’s insurance company agreed to the settlement.

2016 - Matt Wikander achieved a settlement of $300,000 on behalf of a client who suffered a subtalar (ankle) fracture in an automobile crash. Defendants refused to engage in pre-lawsuit settlement negotiations and thus, our client was forced to file the lawsuit and litigate the case. The defendants finally agreed to the settlement shortly before trial was to be scheduled.

2016 - Matt Wikander successfully represented a husband and wife injured in a crash with a large commercial semi-tractor and trailer. The crash occurred after dark when the semi-truck driver was jackknifed and illegally backing in to a customer’s driveway, blocking off our clients’ lane of travel and blinding them in the process with its lights. One of our clients suffered a serious closed head injury and the other, a broken arm. After a contested discovery phase of the litigation, the trucking company ultimately agreed to settle with our clients for $500,000.

2015 - Tom McCarthy and Matt Wikander achieved a jury verdict in Kalamazoo County of $14,450,683 for the estate of an individual who was killed in a catastrophic motor vehicle crash with a garbage truck. The case, Blahnik vs. Republic Services, et al., involved a garbage truck driver who ran a stop sign resulting in the death of Larry Blahnik in 2011. Claims were brought against the garbage truck driver and his employers—whose representatives failed to implement proper driver safety training and allocate proper funding for the training. After a two-week trial, the jury returned its verdict on March 27, 2015.

2014 - Tom McCarthy and Matt Wikander achieved a settlement of $950,000 on behalf of the estate for a middle-aged man who was instantly killed in an automobile accident. Claims were brought against the defendant, who was driving too fast for conditions and thus lost control of his vehicle by hydroplaning in standing water, crossing the center line and crashing into the deceased’s vehicle head-on. After winning numerous motions for the estate, defendant agreed to settle the case prior to trial.

2013 - Matt Wikander and Tom McCarthy achieved a settlement of $670,000 for the estate of a teenager who was killed in a catastrophic work-site accident at a car wash. Claims were brought against the manufacturer of the car wash equipment involved in the incident and the franchisor of the car wash whose representatives failed to ensure that the teenager was properly trained to work around the moving equipment. After defeating numerous motions to dismiss the lawsuit, defendants agreed to settle the case prior to trial.

2012 - Matt Wikander and Kristen Campbell obtained a jury verdict in Kent County Circuit Court in which the jury awarded our client $856,000 in damages in a personal injury case resulting in permanent restrictions to our client's hand. The case involved a renter who was assaulted after intruders were able to access the apartment through a broken security door. The jury found the defendant owner and defendant landlord/management company to be negligent because they had notice of the defective door but did not repair it, thus allowing intruders into the building.

2011 - R. Jay Hardin and Matt Wikander achieved a settlement of over $4,000,000 on behalf of the estates of two individuals killed in a catastrophic crash.

2007-2011 - R. Jay Hardin and Matt Wikander represented the estates of two deceased pilots killed in an aviation crash. After years of litigation, and after defeating the defendant's numerous motions to dismiss the claims, both cases were resolved under confidential terms just before trial was set to commence.

2010 - Matt Wikander achieved a settlement of $425,000 on behalf of a passenger who was thrown off the back of a motorcycle after being struck by a negligent automobile driver. Our client suffered numerous back and lower body fractures in the crash.

2009 - Matt Wikander successfully represented a motorcyclist who was injured after being run off the road by a negligent driver. In a jury trial, the jury awarded our client substantial damages, and the court added interests, costs and attorney fees against the defendant.

2009 - Mark Gilchrist and Matt Wikander successfully represented a minor who was injured in an automobile accident. In a trial for damages, the jury awarded substantial damages to our client, to which the Court added interest and costs.

Selected as a "Local Litigation Star" by Benchmark Plaintiff, 2013-14

Selected as an "Up and Coming Lawyer" by Michigan Lawyers Weekly, 2012

Board Member, The University of Michigan Club of Grand Rapids