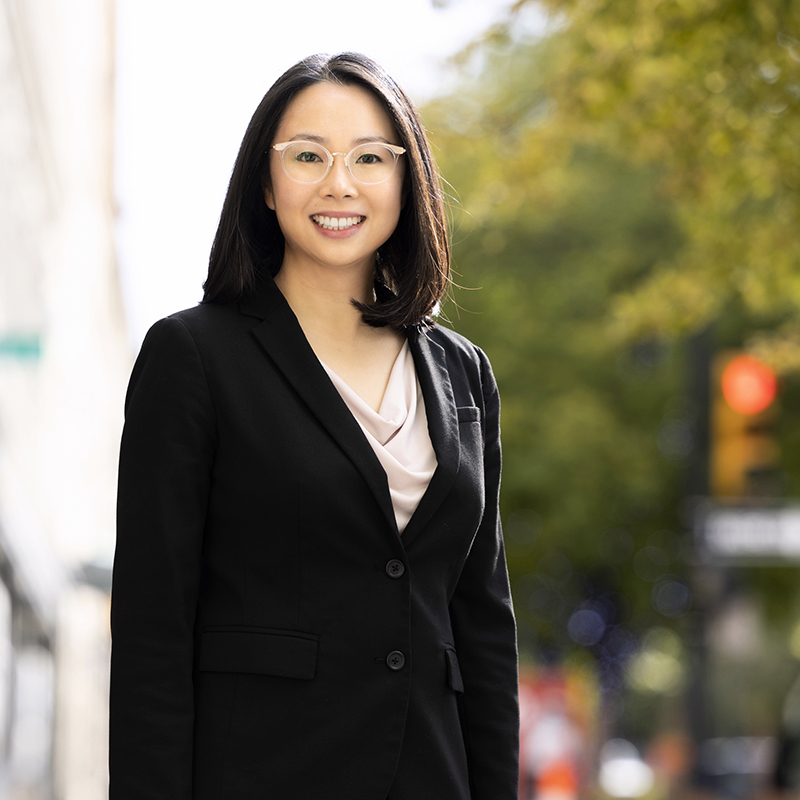 Charissa represents people who are survivors of discrimination, retaliation, sexual harassment and abuse at work and school.  Charissa provides her clients with honest assessments of their best legal options during times of uncertainty and crisis.  Depending on the goals and needs of each client, sometimes this means aggressively pursuing legal action against employers or others who have abused their positions of power, in state and federal courts.  Other times this means negotiating the terms of severance agreements and fair compensation for what her clients have had to go through.  Charissa has represented employees of small and large businesses, public and private educational institutions, and non-profit organizations.  Charissa holds a special interest in civil rights, and she has advocated for people at all stages of life including kids and teens, those new to the workforce and young professionals, as well as seasoned professionals and executives.

Families who have lost loved ones due to the negligence of others in catastrophic accidents turn to Charissa to pursue their legal interests. Since 2016, Charissa has been recognized every year as a “Rising Star” in the area of personal injury by Super Lawyers magazine, which is an honor conferred upon only the top 2.5 percent of attorneys in Michigan who are either under the age of 40 or within their first 10 years of practice. Charissa and her legal team have had the privilege of obtaining substantial justice for numerous Michigan families who have lost their loved ones in wrongful death cases, including compensation in the millions of dollars to surviving family members.

Charissa also serves as trusted counsel for a variety of business clients in complex commercial litigation matters. She is well-versed in both defending against and pursuing claims related to breach of contract, tortious interference with business relationships, defamation, conversion, and fraud in state and federal courts. Charissa’s business clients have included local and international manufacturing companies and distributors, law firms, financial institutions, and proprietors of small businesses.

Charissa is passionate about giving back to the West Michigan community.  Charissa has served as pro bono counsel through the U.S. District Court for the Western District of Michigan’s pro bono case assignment panel.  Charissa also serves as a member of the Grand Rapids Public Schools Foundation Board of Directors and a member of the OutPro Council for the Grand Rapids Chamber of Commerce.

Represented two seasoned women attorneys who had suffered discrimination and retaliation by their employer based upon their gender. Charissa obtained highly confidential, significant monetary settlements in these matters, which allowed both women to move on in life and continue to excel in their careers.

Represented a man against his employer, an educational institution, and an individual perpetrator, for sexual assault and other related claims under Title IX. Though the sexual assault claims were barred by the statute of limitations, Charissa was able to negotiate a settlement with the educational institution based upon its insufficient investigation of the incident under Title IX, achieving a substantial confidential monetary settlement for her client.

Represented a public school teacher who had battled breast cancer in a federal lawsuit against her employer involving claims of disability discrimination and retaliation under the ADA and Michigan law. Charissa vigorously litigated the matter, defeating the school district’s numerous motions to dismiss the case. Shortly before trial, the public school district agreed to a confidential resolution, to Charissa’s client’s satisfaction.

Represented a minor who was sexually groomed and abused by an athletic coach against a public school district. Charissa worked with the minor and minor’s parents to resolve the Title IX claims confidentially with the school district, involving a substantial monetary settlement.

Represented a financial services executive who suffered violations of whistleblowing and retaliation provisions under federal and state law including the Dodd-Frank Act, FINRA and SEC rules, and the Michigan Whistleblower’s Protection Act in her workplace. The financial institution paid Charissa’s client $100,000 upon merely receiving her strongly worded letter.

Obtained compensation for a young woman who was sexually harassed and assaulted by her supervisor at her first job at a non-profit organization. Settled potential claims pre-suit for $97,500.

Represented a state prisoner, pro bono, in a federal case alleging among other causes of action, claims under the Americans with Disabilities Act and 42 USC § 1983 for Constitutional violations arising from prison officials’ failure to protect the prisoner from an assault and battery by another prisoner. The state defendants paid Charissa’s client $40,000 in settlement of the claims.

Charissa Huang and Matt Wikander obtained a confidential settlement of $1.75 million on behalf of the estate of a woman killed in an industrial accident. The product liability case, which involved industrial machinery, spanned the course of multiple years, resolving prior to the jury reaching its verdict.

Charissa Huang and Matt Wikander reached a $2,000,000 settlement after their client, then 30-years-old, was catastrophically and permanently injured as a direct result of a defective and illegal firework. The case involved highly technical issues related to pyrotechnics, products liability and array of applicable state and federal laws and regulations applicable to the manufacture, testing, importation and sale of consumer fireworks. The primary contested issue in the case was plaintiff’s comparative negligence. Plaintiff’s counsel was aggressive in pursuing legal rulings prior to trial, leading to the case settling approximately one month before trial.

Working in conjunction with other members of her legal team, Charissa achieved a jury verdict in the amount of $14,450,683 for the estate of an individual who was killed in a catastrophic automobile crash with a garbage truck.

Working in conjunction with other members of her legal team, Charissa achieved a settlement in the amount of $950,000 on behalf of the estate of an individual who was killed in a catastrophic automobile crash.

In conjunction with Matt Wikander, Charissa was successful in obtaining a settlement of $650,000 on behalf of a client who suffered numerous injuries after his car crashed into a backhoe. The defendant was operating the backhoe illegally, at night and without sufficient warning flashers or markings. The defendant’s insurance company refused to offer any money prior to litigation, instead blaming our client for the crash. Shortly before trial, the defendant’s insurance company agreed to the settlement.

Commercial Litigation:
Working in conjunction with other members of her legal team, Charissa achieved a settlement of $10.3 million less than the claimed damages against three former shareholders of a business in a complex dispute arising from the sale of a manufacturing company.

Working in conjunction with other members of her legal team, Charissa obtained complete summary dismissal with prejudice for individuals in collection suits brought by successors in interest to a large, national bank.

Represented a law firm in a class action filed by tens of thousands of individuals alleging violations of the Fair Debt Collection Practices Act.

U.S. District Court for the Western District of Michigan, 2011

U.S. District Court for the Eastern District of Michigan, 2020

Selected as a “40 Under 40 Business Leader” by Grand Rapids Business Journal, 2021

Selected for the "40 & Under List" by Benchmark Litigation, 2019-2022, in the areas of Labor and Employment, Commercial and Transactions, Product Liability and Recall

Listed in Michigan Lawyers Weekly's Women in the Law, Class of 2015